Threatened by displacement / Destruction of a tenant community 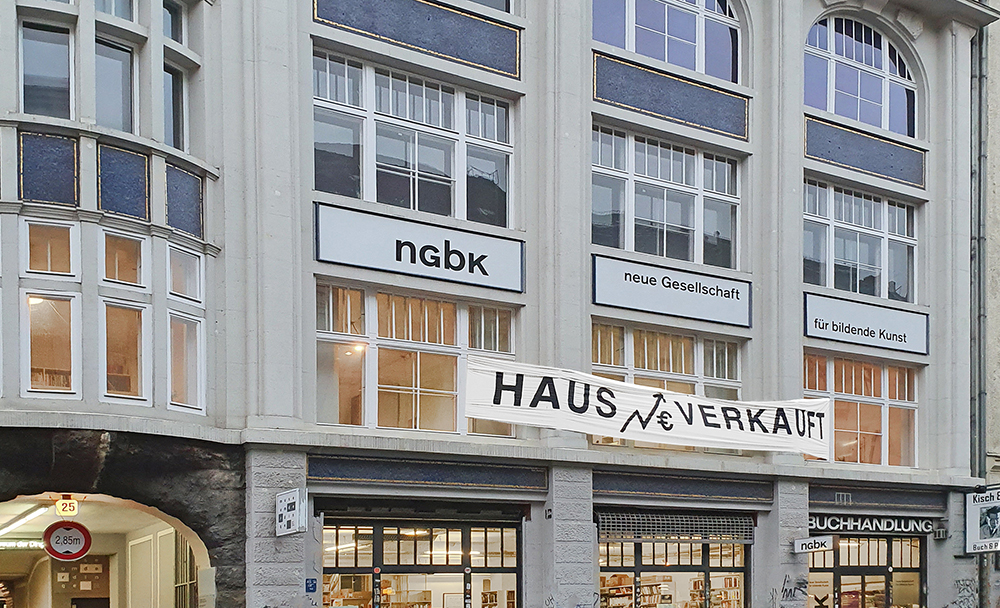 The tenants of Oranienstraße 25 in Kreuzberg have reason to fear that they will be forced out of their building with exponential rent increases. New international owners indicate rent raises that would result in the displacement of long-time tenants including a bookstore, work- and exhibition spaces and a museum.


The commercial property at Oranienstraße 25 is a building with what was for a long time a typical tenant structure. These tenants form a social and cultural hub that has thrived in Berlin’s famed SO36 neighborhood for decades. The diverse enterprises include the iconic Kreuzberg bookshop Kisch & Co, the neue Gesellschaft für bildende Kunst (nGbK), the Werkbundarchiv - Museum der Dinge, the architecture firm kleyer.koblitz and the yoga studio Jivamukti offer between them a broad spectrum of socially and culturally relevant, community oriented, and successful endeavors. The building is a meeting place, educational institution and art venue. Last autumn, the property, previously owned by Berggruen Holding, was purchased by an anonymous Luxembourg real estate fund, which is indicating an intention to clear out the long-time local tenants from the entire property. In addition, the new owner is going out of its way to remain anonymous.
Countless livelihoods are threatened as the tenants and their supporters are fighting to stay put in the neighborhood of which they are part.

From the first day of its ownership in early 2020, the Victoria Immo Properties V S. à r.l. real estate fund - which appears to be a shell company set up in the tax haven of Luxembourg - has left no doubt about its purely economic interest and plans to exploit the property. Despite early efforts, the bookstore Kisch & Co was not given the courtesy of a serious offer to be negotiated for a long-term lease extension. Most recently, a grace period of seven months until the end of the year was offered - combined with confidentiality clauses: a lease was to be a condition for a positive external presentation of the new owner company to the press and to numerous Berlin politicians listed by name in the draft lease - an extremely questionable understanding of the law and partnership.

In the meantime, Kisch & Co expects to receive an eviction notice. Their lease expired on 31 May 2020. This has generated great concern and resistance in the neighborhood and beyond; the loss of the beloved bookstore itself is compounded by fears for the livelihood of the employees and owners. After twenty years in business, their importance to the community is being once again brought to light by the immense interest in their welfare publicly aired by many Berlin politicians, residents and tradespeople.

The architecture firm kleyer.koblitz was offered an early contract extension with a cold rent of 38 euros net per square metre.  This represents an increase of approximately three times their current rent. Their offices are commercial space on the 4th floor with the simplest of fittings. Increases like this now threaten all tenants of the building over the next one to five years.

For all tenants, who have been working in Kreuzberg for decades, these increases mean tripling or quadrupling the current rents, which have already risen considerably in recent years. Such exploitative rent increases are blind to the fragile and special characteristics of the neighborhood, whose attractiveness depends on the ideals and content of exactly these type of creative communities. It is to be expected that the tenants at Oranienstraße 25 will lose their work and exhibition spaces in the near future. Their livelihoods will be wiped out and their tenant community destroyed. In the long term, this will massively change the special qualities of the district and the character of the neighborhood. At best, only venture capital financed start-ups would be able to finance rents at the proposed level.

The new rent proposed by the new owners in no way reflects the general condition of the building, its location, or the business models of the current tenants or the revenue they can reasonably generate in the area. The rents being demanded would be difficult to justify even in a prime Berlin location; such figures suggest that the new owners are either unfamiliar with the neighborhood of their new acquisition or are deliberately demanding usurious rents to remove all current leaseholders. There is significant community concern that these predatory practices will destroy many valuable local connections that have developed in this part of Oranienstraße.

The construct of Victoria Immo Properties V S reads like a textbook of aggressive global turbo-capitalism. Tenants are confronted with maximum opacity: nameless owners and in the background managers who are difficult to identify. Needless to say, this raises questions around the social and moral responsibility that goes hand in hand with the ownership of property (Article 14 (2) of the German Constitution).

Trautvetter, as set out in detail in his newspaper article, believes it is very likely that billionaire TetraPak heirs Sigrid and/or Lisbet Rausing are behind the acting lawyers who are typically shielding the real owners with shell company constructs like Victoria Immo Properties V S. à r.l. Both sisters are active in their own foundations, Sigrid Rausing is the owner of the renowned Granta publishing house. The tenant community O-Str. 25 appealed in mid-May 2020 with a letter to Sigrid and Lisbet Rausing and asked for fair negotiations.

Sigrid Rausing has now denied involvement, which shifts the focus to Lisbet Rausing with regard to the ownership. Lisbet Rausing, the founder of the London based Arcadia Fund (https://www.arcadiafund.org.uk), and her husband Peter Baldwin, who is also active in the Berlin cultural sector, present themselves publicly as philanthropists for the preservation of endangered cultural heritage. The Arcadia Fund claims to be "preserving endangered culture”, with a "focus on cultural grants to museums, archives and universities”, and "promoting open access to culture and education".

THE TENANT COMMUNITY DEFENDS ITSELF

We as a tenant community O-Str. 25 find it unacceptable that investors from abroad use legal loopholes to operate under the cloak of anonymity, so cleverly that functioning commercial spaces and businesses employing significant numbers of employees are purposefully undermined.
It is unacceptable that while maximum transparency is required of the existing tenants, including disclosure of all business balance sheets as a prerequisite simply to continue their tenancy, the new and secret owners do not even have to disclose their names and addresses.
How is it possible in a constitutional state that existing tenants can be given contracts with authoritarian secrecy clauses while being instructed to publicly praise their new landlords to press and politicians?
Why is there still no commercial rent control that prevents destructive and antisocial profit exploitation right from the start?
Our tenant community O-Str. 25 fights for our stay in the property and for fair, affordable rents. We ask for your support.

"Wir sind die Straße. Kisch & Co. bleibt! // We are the street. Kisch & Co. stays!" 21 video contributions from neighbours* who express their concern about the displacement of the bookstore. https://www.youtube.com/channel/UCL5rfVIyCha6uiEnfFa-rhw