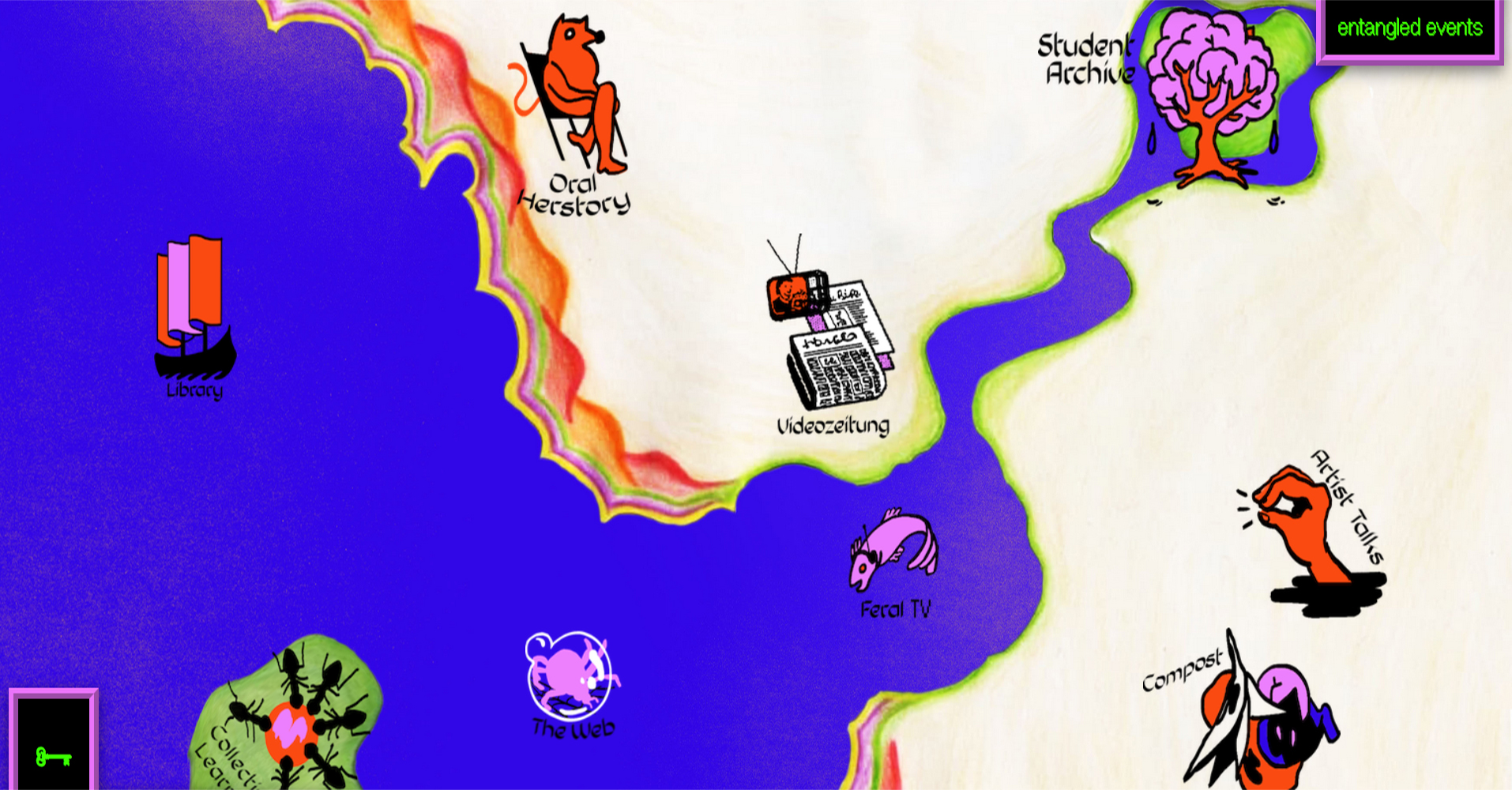 project website with excerpts from the archive, oral herstory, and a collection of artistic works, readings, and documentary materials

»Interflugs 30: feral methods« aims to examine and update the context of autonomous, collective educational and cultural practice in Berlin and beyond based on three decades of self-organised learning and teaching.
Interflugs is an autonomous student-run organisation that originated in large scale protests in West Berlin 1989 against the economisation of education. As a result of the strike, students from the University of the Arts (UdK) Berlin were able to secure organising power and a budget that allowed them to set up their own curriculum and facilities, mainly geared towards interdisciplinarity and new media, which at the time did not exist at the institution.

Over the past 30 years, the group has been running workshops, lectures, an equipment loan and editing rooms that are open to students and non-students alike. For many years, students also ran a ›Freie Klasse‹ [free class] studying outside the oversight of a professor, hereby defying the ancient masterclass system. Interflugs works to increase access to the means of (art) production, to question the institution, and to support emancipatory struggles inside as well as outside the school. Despite increasing precarity, Interflugs has strived, in different ways and times, to offer a place to gather for those who desire transformation or rebellion against the dominant ideology of the arts university and for those dreaming it anew.
A wide variety of material has been collected over the past three decades - video journals, papers, zines, posters, and documentation of lectures. »feral methods« now transfers this material into an archive, examines it from within and makes it accessible to a wider public. The project group approached this multilayered material as a messy pile of compost, dirt to shake up, turn around and grow new ideas on.

A new section of the archive provides a collection of interviews with members of all generations of Interflugs, ›Freie Klasse‹ and ›Videozeitung‹ [Video journal] conducted over the past year in the framework of this research. More than fifty different voices from three decades of the autonomous faculty lay the ground for an oral herstory, providing a sense of the multitude of practices and intentions, troubles and contradictions, shifting priorities and proposals of this organisation.

In order to connect beyond the archival work with current struggles, five collectives have been invited to pick up the format of the ›Videozeitung‹ that originated in the 1989 strike: students filmed what seemed newsworthy to them with video cameras and broadcast the material on televisions set up at all Berlin universities.
Up-to-date video journals have been produced by Anonymous arts students Copenhagen (Copenhagen), Rojava Film Commune (Rojava), #FREESZFE (Budapest), Polizeiklasse Dresden (Dresden), and Mon Autre École / Madrassati Nafidati (Algiers). These videos will be shown for the first time and portray current struggles and practices for free and democratic education.

Continuing the practice of self-organised learning, »Interflugs 30: feral methods« is accompanied by a program of workshops, discussions, and audiovisual works offered online as part of the project. The core questions here include the role and modes of archiving in self-organised collective contexts and the increasingly adverse conditions and ongoing challenges for creating and maintaining such spaces of solidarity. Furthermore the ever urgent question of how knowledge is transferred outside of the exclusive economies based on its privatisation, will be addressed. What is lost and missing from memory? How do we forge systems of support and care to share the burdens of growing precarity? How do we archive friendships and gossip? And how can counterpublics be sustained, when public life is put to a halt?